By: Mia
In: breads, Recipes
With: 0 Comments

Homemade Croissants that are so buttery, flaky, and guaranteed to make your morning breakfast so much more delicious! Take this opportunity to master classic French croissants. On y Va!

Croissant is synonymous with French bread but this buttery, flaky, pastry is actually of Austrian origin, named for its crescent shape. To make the pastry, the dough is layered with butter. Rolled and folded several times in succession. Then rolled into a sheet, in a technique called laminating.

Sounds difficult? Well… with the way I did it, I won’t call it difficult but it sure involves some patience. Since we live in Paris my sister-in-law keeps telling me to try it and I keep holding it off. Mainly because I’m horrified that it might be a disaster. But fortunately, a “Boulanger” or baker gave me some tips and it gave me the confidence to try.

How to make the dough for croissant.

The first time I tried, it was a success but then on the second batch, it failed. I realized that you have to be quick on the rolling pin when flattening the dough.

So what I can suggest is be patient because of a lot of dough resting time and be quick when rolling and folding the dough. But you’ll get the hang of it. 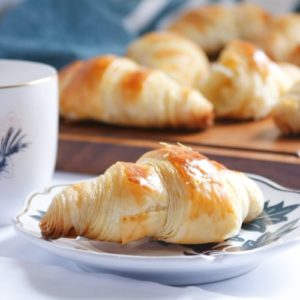