By: Mia
In: desserts, Recipes
With: 8 Comments
Jump to Recipe Jump to Video Print Recipe
27 shares

Suman sa Lihiya or Bulagta with a choice of latik or grated coconut with sugar as toppings! Whatever you choose, it will surely be pure pleasure!

Another variations of suman is by using root crops such as cassava or cornmeal like my suman mais recipe.

In the Aurora province, surfers snack on black rice suman. The dark colored rice is naturally sticky. It is made by steaming the rice then adding in coconut milk.

Tupig of northern Philippines is made of grounded glutinous rice, coconut milk, and sugar. What sets it apart is that it’s grilled in charcoal rather than steamed or boiled.

Ibos Suman is delicately wrapped in palm leaves that looks amazing. You pull open on one side and the palm leaf will unravel up to the point where you want thus leaving you with something to hold on to. It is typically dipped in sugar or coconut jam. These are just some of the variations and there’s a lot more.

Where do I get banana leaves?

If you are living abroad, getting a hold of banana leaves might be tricky. Like me, I usually buy them at Asian stores but they’re frozen. One technique I can share with you is NOT to run the leaves over the fire to make it softer – it will most likely be brittle and easily breaks. What I do instead is I gently wash it with warm water. If you do get hold of fresh ones then by all means heat them over fire, just be careful not to burn your fingers. This suman recipe is simple to make and will be enjoyed by children and adults alike! Try it and let us know!

Tie the suman securely whether you’re using a kitchen twine or plastic straw rope to avoid the banana leaves opening up when boiling.

Rinse the glutinous rice after soaking. This helps remove the slight odor from the lye since it was soaked overnight in the mixture.

Use kitchen twine rather than plastic straw rope. I’m not really comfy with plastic in high heat.

Tibok Tibok is a creamy and flavorful Kapampangan delicacy. Enjoy this velvet-rich dessert with generous toppings of coconut curd! 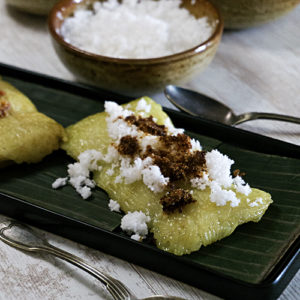