By: Mia
In: desserts, Recipes
With: 0 Comments
Jump to Recipe Jump to Video Print Recipe
9 shares

Ube Biko Yema lets you enjoy three of your favorite desserts in one bite! A combination of Biko Kalamay with ube flavor topped with creamy yema custard brulée.

Just like my biko kalamay recipe, ube biko yema is a delicious sticky rice cake treat! With purple yam flavored rice cake topped with custard brûléé. I just love the ube taste of the the rice cake plus the decadent yema on top. Every bite is pure joy and you’ll keep coming back for more!

What is Ube Biko Yema!

I love fusion food whether it’s an entrée or desserts. A good example of this obsession is my puto flan recipe where you combine steamed cake and leche flan. Ube biko yema recipe is no different but instead of two, you’ll get three yummy desserts in one!

By infusing ube or purple yam flavor to the glutinous rice, you’ll have sticky rice cake full of ube taste. A layer of sweet yema is spread evenly on top then baked until caramelized to perfection. This sticky rice cake is not only good as dessert but great as a snack too!

Why this dessert recipe works!

The classic biko kalamay is great in its own way but ube biko yema gives so much more in terms of flavor.

Making this biko recipe is easy but does require some time to make. But all of your hard work will be rewarded with this unique and tasty dessert that everyone will enjoy.

If you fancy, you can only make the ube biko without the yema and top it off with latik or coconut curd. My taro ube kalamay recipe can guide you on how to make latik.

Some tips for an amiable experience!

Do not add sugar when cooking the rice, adding sugar can under-cook the rice.

Use light brown sugar to preserve the purple color of the rice cake or biko. You can also use regular brown sugar but with a deeper purple hue.

Cook the yema in low heat to avoid curdling of the condensed milk.

Yema balls made from condensed milk and egg yolks are sweet confectioneries that are simply delicious!

Churro ube cheesecake bars topped with cinnamon and sugar are the perfect dessert or snack!

Enjoy three delicious treats in one bite! If you have any request for more fusion desserts, let us know! Adieu, MIA 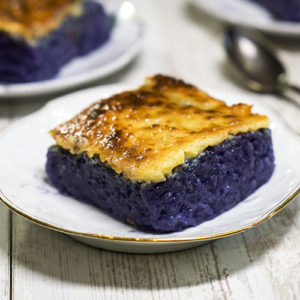