By: Mia
In: pasta, Recipes
With: 0 Comments
2shares
Jump to Recipe Jump to Video Print Recipe

Homemade Egg Noodles Recipe will give you fresh egg noodles to make Pancit Miki, Lomi or Chow Mein. Making miki noodles or egg noodles is not as hard as you might think!

This egg noodle recipe is pretty straight-forward with just a few ingredients which you may already have. What’s even better is you don’t need any special equipment like a pasta roller. I made pancit miki guisado right after making the miki noodles and let me tell you, IT’S AMAZING! Nothing beats using fresh egg noodles in your favorite noodles recipe!

Egg noodles… Why not?

I have tried making homemade Italian pasta and it didn’t turn out that good. Egg noodles are much simpler and easier to make since you have more control on how thick and wide your noodles can be. Plus, it’s a great alternative for pasta with your homemade sauce.

Why this recipe works!

This homemade noodles recipe will produce fresh, chewy and bouncy egg noodles that you can immediately use or store for later.

The recipe yield 500 grams of fresh egg noodles but it can be doubled or even tripled.

Enjoy rich flavor and silky textured noodles due to the fat from the egg!

I used lye water in this recipe to make the dough more manageable. You can substitute lye water by diluting 1/2 tsp baking soda in 2/3 cups warm water then cool down before adding egg, oil and food color.

No need for a pasta roller or even a mixer to make the noodles. Using your hands to knead the dough and a sharp knife is the equipment you’ll need to make the egg noodles.

Some tips for an amiable experience.

Flour is your bestfriend! Always flour when folding and rolling the dough to avoid the noodles from sticking together.

You have control over the thickness and width of the noodles. So, depending on what noodle dish you’re planning to make, make them as thick or as thin as you want.

Add flour gradually when forming the dough. Just add enough flour until the dough doesn’t stick to the mixing bowl or counter top.

Tonkotsu Ramen with rich porky broth and creamy texture that you’ll love! This is so good that it feels like you’re eating in a Japanese restaurant.

Pancit Malabon with thick rice noodles coated in rich and vibrant sauce and loads of toppings. 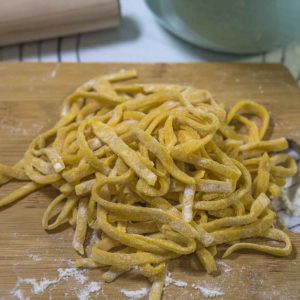