Christmas ham is a favorite in many households during the festive season. Rich, sticky glaze is slathered all over this juicy, tender ham. With caramelized brown sugar on the crust and an incredible flavor inside. You won’t buy store-bought ham one you tried this home-made recipe!

As a kid, Christmas dinner is not complete without glazed ham. It usually serves as the centerpiece for our Noche Buena. This homemade ham has a hint of sweetness. Topped off with a sticky pineapple and honey glaze, this will fast become a tradition in your house too! The recipe requires some planning ahead if you want to serve it on Christmas eve because of the curing time. Is it worth the trouble of making your own ham? It definitely is! Seeing your own glazed ham gracing the dinner table will make you tap your own back and say “job well done”.

As I said this recipe will require some patience. Mine took 7 days of curing making the meat flavorful and the fat doesn’t go rancid quickly. I used 2 1/2 kilos of Pigue (ham part) of pork but you can also use hock or pork loin for example. I suggest starting with 1 and 1/2 kilo of pork ham and using half of the ingredients listed. A smaller portion will make it easier for tying with twine. But if you’re confident, just go with what is given in the recipe and enjoy it. You will also need a kitchen blow torch to caramelize the brown sugar but you can also use the side of the knife by running it through fire and slightly touch it to the sugar. All in all, it’s not a difficult process and it is a guaranteed success! 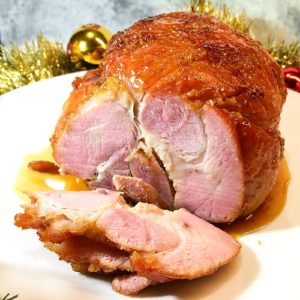 For boiling the ham